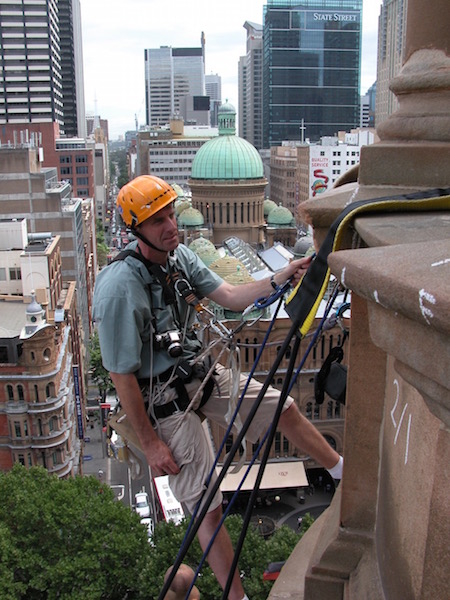 The works, executed in 2012 -2013 included replacement of significant sandstone elements, as well as stone indenting, repointing, stonework desalination and mortar repairs. Seismic bracing of the Bell Tower was also carried out. Jasper Swann provided ongoing Quality Assurance services for the duration of the construction phase of the project.

Of particular interest was the replacement of all ten Corinthian capitals in the bell tower. Each capital was carved lovingly by hand – a breath of fresh air in an era when robots are frequently put to such tasks – and faithfully replicated the originals. (Follow the link to Publications to download Jasper Swann’s article ‘Capital Investment’ published in Discovering Stone).

Following the completion of the Clock Tower restoration works, Jasper Swann was engaged by Jackson Teece Architects to advise how best to conserve and restore the sandstone facades of the Sydney Town Hall’s ‘Vestibule’ building. He assisted Jackson Teece in the development of a schedule of sandstone restoration and conservation works, and in development of the stonework specification.

The works were carried out in four stages between 2013 and 2016. Jasper Swann provided ongoing Quality Assurance services for the duration of the construction phase of the project.

This project also represented a milestone in the development of a new approach to the safe removal of asbestos-containing pointing mortars, which are surprisingly commonplace in heritage sandstone facades. The methodology, jointly developed by Jasper Swann and architect, Peter McKenzie, has become the new industry standard, providing assurances for the owners of significant building that asbestos-containing pointing can be removed safely, at minimum cost and without unnecessary loss of significant heritage fabric. (Follow the link to Publications to download Jasper Swann and Peter McKenzie’s article ‘The Safe Removal of Asbestos-Containing Pointing’ published in Discovering Stone).